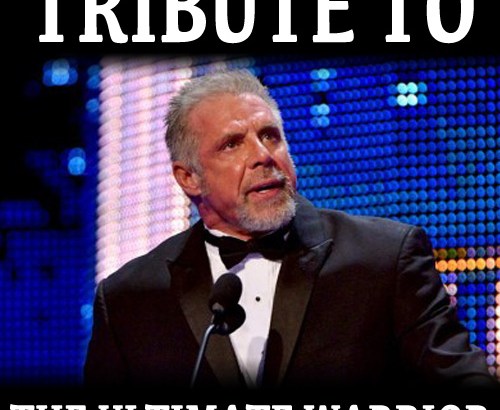 There is a hilarious interview segment in WWE’s 2005 DVD The Self Destruction of The Ultimate Warrior that has Chris Jericho, Edge (who as a teenager attended Wrestlemania 6 and thus got to see The Ultimate Warrior wrestle Hulk Hogan), and Christian. The 3 modern-era WWE superstars talk about Warrior’s over-the-top frenetic, rambling stream-of consciousness promos and then deliver almost perfect imitations of those promos. Jericho notes that he and his friends would ask each other “did that make any sense?” “No, but it sounded kinda cool, so yay!”

That kind of sums up what The Ultimate Warrior meant to professional wrestling and it’s fans. It didn’t matter that he rubbed many of his colleagues the wrong way for reasons that may have been legitimate and petulant. To fans who followed pro wrestling during the 1980’s and early 1990’s, this was the man who electrified audiences with his technicolor-fueled energy that was completely of its time and space. Because of that, and because he remained a beloved figure to fans who were young during Warrior’s heyday, it seems appropriate that the business should pay homage to his legacy. They finally did this past weekend during WrestleMania weekend when Warrior took his place in the WWE Hall of Fame beside fellow legends Jake “The Snake” Roberts, Scott “Razor Ramon” Hall, Mr. T, and others.

It was a long overdue tribute to the character who had been brought to life by the man behind the face paint Jim Hellwig. It was also, sadly, a timely one when just one day after a triumphant return to WWE TV on Monday Night Raw, Jim Hellwig died at the age of 54. His legacy, once denigrated by the very company that helped create it, has now been given the WWE seal of approval.

It was a complete 180-degree turn from the company’s stance when it released the Self-Destruction disc. On that disc, figures from WWE Chairman Vince McMahon to wrestling legends like Hulk Hogan, Ted DiBiase, Jim Ross, Sgt. Slaughter, Jerry Lawler, Bobby Heenan, and Jim Ross all took shots at Jim Hellwig for purported crimes against the wrestling industry.

Sure, he wasn’t the greatest athlete and performer in the business. Hellwig’s former friend and one-time tag team partner Steve Borden, AKA Sting, was a far better athlete and was a true natural at the craft of pro wrestling. But this one thing cannot be denied: When Warrior was on the screen you had no choice but to pay attention to him. Whether he was squashing The Honky Tonk Man at the inaugural SummerSlam, fighting Rick Rude at WrestleMania V, or giving Hulk Hogan the “Ultimate Challenge” at WrestleMania VI. But the penultimate Warrior match was the retirement match at WrestleMania VII against Randy Savage. After a spurned Savage had cost Warrior the WWE title against Sgt. Slaughter, Warrior and Savage put their careers on the line in the ultimate grudge match.

Quite simply it would be, by far, the best match Warrior would ever perform. Part of it was that he was paired with Randy Savage who was one of wrestling’s most gifted performers. The other part was their chemistry. You believed that these guys hate one another and wanted to destroy each other at all costs. After Savage delivered several of his trademark top-rope elbow smashes, Warrior made the comeback in true comic book fashion. The match is famous for the return to the good graces of the audience for Savage and his onscreen reunion with Elizabeth. But make no mistake about it, Warrior brought his A game to WWE’s biggest show of the year.

It was a glorious moment that would be short-lived. A few months later would be the first estrangement from Vince McMahon. In response to a money dispute McMahon fired Warrior backstage during his main event tag-team match at SummerSlam ’91. However, with Hulk Hogan departing the company McMahon brought Warrior back with a return at WrestleMania VIII. Whether the moment had passed or whatever, Warrior 2.0 didn’t have the same magic that he did during his 1987-91 run. Before a main event run in a tag-team with Randy Savage could begin, Warrior was fired once again. Four years later with both Hogan and Savage gone for World Championship Wrestling, McMahon took a gamble on a Warrior comeback once again. Warrior returned for a few months in 1996 which included a WrestleMania XII match where he squashed the future Triple H and a puzzling feud against Jerry Lawler. Like his ’92 run, the time had clearly passed. Amidst accusations of no-showing live tour dates, Warrior was fired for the final time.

His time in wrestling was thought to have been done. But in 1998 WCW president Eric Bishcoff, at the behest of Hulk Hogan, brought the Warrior in for a feud with “Hollywood” Hulk Hogan. Unfortunately, the time had changed too much. The business had moved on and even Hogan had evolved. Eight years after their legendary battle at WrestleMania, they locked up at Halloween Havoc ’98 and showed that sometimes sequels are just bad ideas better left on the cutting room floor. Bischoff dismissed the match as wrestling’s worst PPV match. Warrior again left the business.

Rumors would pop up. Rumors and bad press. Controversy surrounded his speaking engagements, such as his 2005 presentation to the UCONN Young Republicans where he became infamous for his outspokenness and extremism. More recently, it was his YouTube rants against figures like Hogan and Kevin Nash.

Despite how off-the-rails Jim Hellwig seemed his fans never forgot the character that excited and entertained them during their childhood. When he returned to WWE in 2013 culminating with his 2014 induction to the Hall of Fame, it was those fans that Warrior thanked during his acceptance speech. Among wrestling aficionados, he was a polarizing performer. But to a specific age group, he was as vital a hero as Roy Rogers was to an earlier generation. In 1973, Elton John co-wrote and recorded an homage to Rogers on the Goodbye Yellow Brick Road album. Perhaps these should be seen as fitting words for the fallen Warrior. Jim Hellwig may no longer be with us in this mortal coil, but for the fans that he touched, the Ultimate Warrior will be forever.

What are some of your favorite Warrior matches and memories? Leave them in the comments below! And stay tuned for a live special on Mega Powers Radio to The Ultimate Warrior coming soon! 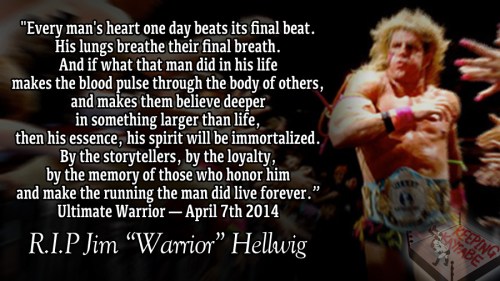 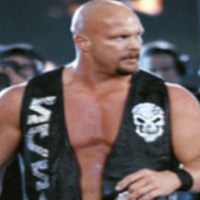 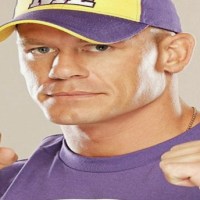