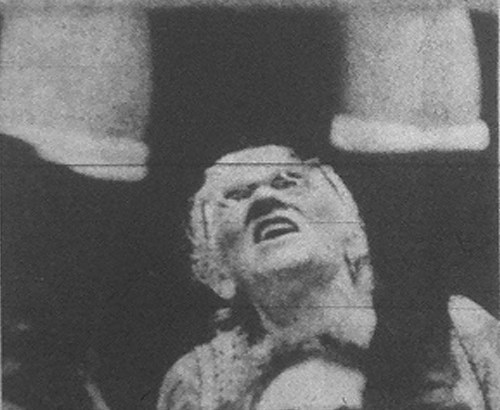 In professional wrestling these days the audience has become as much of a part of the show as what goes on in the ring. Just flip on Monday Night Raw and during the opening segment you will see thousands of people trying to get their 15 minutes of fame by bringing signs, dressing up, or doing anything they can to get a glimpse of the spotlight.

However with the lights always turned on and the audience being completely visible, most attempts at garnering attention are swallowed up by the sheer spectacle of it all. At best, the crowd as a whole can get noticed with a chant (What?) or by singing the themes song of the popular wrestler of the week (Fandango).

There was a time though when things were different. The lights used to be focused only on the ring. Fans did get noticed then though. They certainly made themselves heard of course. Sometimes a brave soul would get up some liquid courage and storm the ring, usually to the disastrous result of an ass whooping or some jail time.

However one unlikely super fan made themselves known to everyone in the Northeast Corridor in New York, Baltimore and Washington, DC in the 70’s and early 80’s. The most unlikely of suspects – a diminutive little old lady who hated the heels and loved Bruno Sammartino. Miss Georgette Krieger – the “Little Old Lady at Ringside” 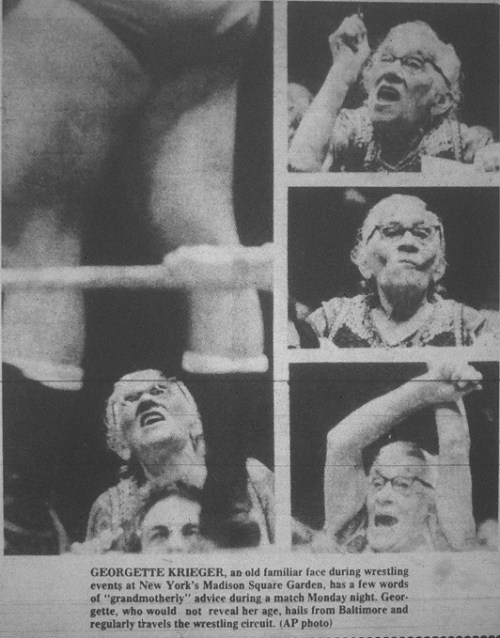 I can’t give you much background on this woman other than she lived from 1899-1982 and resided just a few blocks away from me in the Southeastern part of Baltimore City known as Canton. What I can tell you is that from the moment I started going to see live WWF wrestling at the Civic Center she was a huge part of the show.

She always sat front row ringside and constantly rode any “bad guy” throughout the entire show. Whether it was wiping away the ceremonial salt of Mr. Fuji, grabbing Killer Khan by what little hair he had on his head, or just pounding the mat anytime Bruno Sammartino was in trouble – it was always entertaining. It was to the point that many of us thought she was a plant, sent there by promoter Phil Zacko or Gorilla Monsoon to be part of the show. Well, she was part of the show, but she was not a paid plant. In fact Zacko hired a security guard primarily to keep Georgette from going overboard.

Just about everyone I know has a story to tell about this little woman.

She was a mainstay at the Baltimore Civic Center but also traveled to Washington, DC and Madison Square Garden frequently. I’m sure just about everyone who witnessed her antics has a story about her. For example:

(from “BattleRoyal” at the Kayfabe Memories forum):

At a December Capital Centre match in the mid-1970’s, Georgette, as was her custom in those long-ago days before ring barriers were in vogue, would step right up to the perimeter of the ring and heckle the heels. As she was riding Stasiak pretty fiercely, Stan the Man turned around, went right up to her face, and yelled in Georgette’s native French, “Ferme ta gueule et joyeux Noel!”, which in English is translated, “Shut your yap and Merry Christmas!”.

My favorite story comes from my good friend Calvin Gundlach, a long time Baltimore wrestling fan who had been attending matched since the 1960’s.

We were at the show one night, and Larry Zbyszko was wrestling The Great Hussein Arab of Iran (later to be known as The Iron Sheik). Zbyszko was a good guy at the time, but Miss Georgette was all over him the second he came out. Even as Larry was waving to the fans, smiling and signing autographs she was pointing at him and giving him the evil eye. We all thought she was nuts.

This show in Baltimore was on January 26th 1980 where Zbyszko and Hussein fought to a 20 minute draw. Miss Georgette was aware of something that had occurred 4 days prior, that few other than the wrestlers in the building knew about.

WWF @ Allentown, PA – Agricultural Hall – January 22, 1980 Championship Wrestling taping:
Bruno Sammartino defeated Larry Zbyszko via disqualification at 9:34 when Zbyzsko threw the referee to the floor and hit Sammartino in the head with a wooden chair three times, busting him open.

She didn’t have the luxury of the internet. She wasn’t a subscriber to Dave Meltzer’s “Wrestling Observer”. Yet she was the first “smart fan” we’d ever met.

“Do you know what that no god sonofabitch did to Bruno?” she said as she educated those around her about Larry’s Judas turn on his former mentor.

The last time I saw Miss Georgette was on October 17th 1981 at the Capital Centre in Landover, Maryland. She was 82 years old at the time. I was sitting in the 4th row and of course she sat three rows ahead of me. It was a loaded card with Bob Backlund defending the WWF Championship against Intercontinental Champ Magnificent Muraco. Andre the Giant was set to get revenge against Killer Khan in a stretcher match. Great bouts for sure, but Miss Georgette made her mark in an early undercard match.

Top contender Angelo “King Kong Mosca” was up against Tony Garea. At one point in the match Mosca was dropped kicked out of the ring right in front of Miss Georgette. As he was getting up she pointed her cane toward Mosca yelling at him and he grabbed it from her causing her to fall back to her seat. He broke it over his knee and used the other piece as a foreign object before getting the pinfall. Later on during this matinee show, Miss Georgette was seen using a sawed off Washington Capitals hockey stick to get around given to her by the arena. 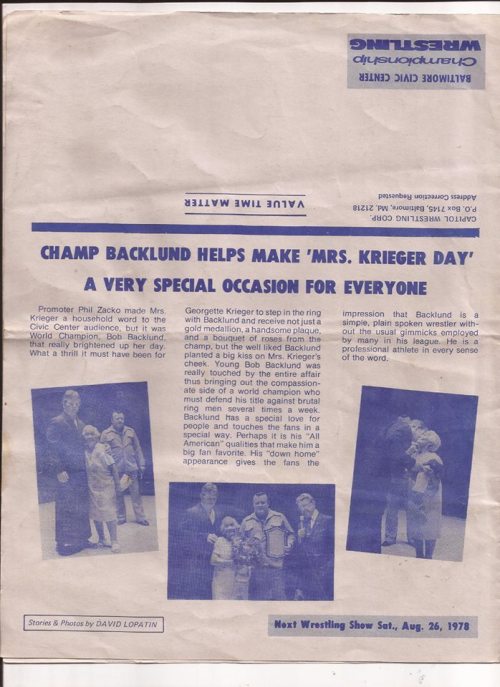 Thanks to the folks at Kayfabe Memories, Wrestling Classics, Old School Maryland Wrestling on Facebook, Calvin Gundlach, Graham Cawthorn at The History of the WWE website and Kevin Eck.

Born and raised in Baltimore, MD. Age 45 (but don't look or act like it) Wrestling fan since the late 70's. Primary interests: WWWF/WWF, Jim Crockett Promotions/NWA 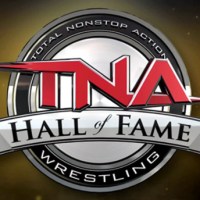 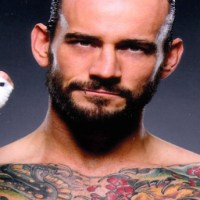 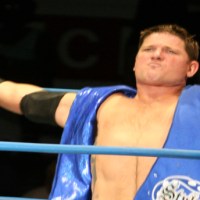 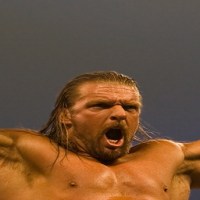 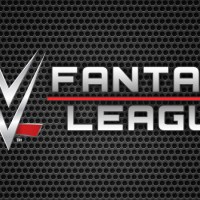 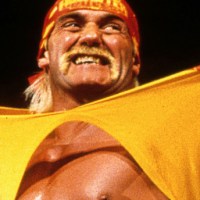